Another week, and another month, is in the books!  July was an exciting month for Learning Domestic Discipline, and we're excited about what August has in store as well.  If you missed anything this past week on the LDD blog, we'll get you all up to speed.  Let's recap the new content from the past seven days.

"Spanking" vs. "Hitting" - The Great Debate - Do "spanking" and "hitting" mean the same thing?  I (Clint) break down the definitions of the two words and offer my opinion on the differences between the two.  What do you think?  We'd love to hear your thoughts on the debate, too.

Five Things Friday: The August Kickoff Edition - A very, shall we say, interesting "tantrum" video is making its way around the internet, information about the LDD Retreat, and a big personal announcement are all a part of the latest edition of the Five Things series.

Learning Domestic Discipline has plenty in store for the month of August, and we hope to have you along for the ride.  Onward we go into a brand new month!  Enjoy your upcoming week. :)

Written by Learning Domestic Discipline at 5:02 PM No comments:

We hope you all have had a wonderful week.  The past seven days have been very productive here at Learning Domestic Discipline.  We've launched a new entity to the site, and we recorded a new podcast!  We hope you're enjoying the new features of the site.  If you haven't had a chance to see what's new, let's get you all up to speed with the latest happenings at LDD.

Mailbag Monday: Week 14 - We touch on gender roles in domestic discipline and the different dynamics in the lifestyle, we discuss our favorite foods, and we talk about what things we'd gather if we only had 5 minutes to gather them in a dreaded apocalypse situation.

The Download Site Has Launched And It Features A Brand New Podcast! - The day of the Download Site launch has finally come!  All of LDD's downloads are in one convenient place, and all of our eBooks are once again for sale!  We're offering Grand Opening coupons on all LDD eBooks, too!  The new "Additional Punishments" podcast covers the corner time, bedroom time, and removing privileges punishments, so stop on by the new Download Site and check it out!  While you're there, you can download your copy of the new free podcast. :)


Saturday Stories: "Evolution of Maintenance Spankings" - I (Clint) take over the Saturday Stories column to talk about how maintenance spankings have evolved into something unexpected in our marriage, and how we're better off because of it.

Thank you for joining us on another great week at LDD!  We couldn't do any of this without your support, and it means so much to us.  We'll see you next week!

Written by Learning Domestic Discipline at 6:03 PM No comments:

It was a very up and down week for Learning Domestic Discipline.  We've been dealing with some technical issues on the forthcoming LDD Download Site that have been very frustrating to say the least, however we're doing everything we can to work through them and launch as soon as possible.  We owe a big thank you to a very good friend of ours, Callie's husband (from the blog About Us) who offered us a helping hand all the way from Australia.  Thank you so much, H!  Your knowledge and expertise on the matter was, and is, very much appreciated.  We'll get the Download Site up and running soon!

Despite the technical troubles, we still had a great week here at LDD.  Let's recap the week that was, shall we?  Yes, we shall.

Mailbag Monday: Week 13 - We offer our thoughts on handling movement from the submissive partner during a spanking, preemptively punishing before a couple is scheduled to be apart from one another for an extended period of time, and whether or not we think posting an ad on Craigslist to spank outside of the relationship is a good idea in this week's round of Mailbag Monday questions.

Due to the aforementioned technical difficulties, there was no Wednesday post this week.  The announcement of the LDD Downloads site was scheduled, however given the issues we've had with its forthcoming launch, we've had to postpone the post.  It'll go live as soon as the Download Site is all set to go!

Five Things Friday: Lightning Bolt Edition - I (Clint) took over my wife's Five Things series this week to talk about a close call on our vacation, an interview Chelsea recently did for a radio show, and a new album from the most personally influential band of my lifetime.

That wraps up another week here at Learning Domestic Discipline!  See you next week!

Written by Learning Domestic Discipline at 5:34 PM No comments:

We hope our fellow Americans enjoyed their holiday week (Independence Day) as much as we did!  We had a wonderful week both personally, and with Learning Domestic Discipline.  We added three new articles and sent out the July LDD Newsletter, all while enjoying fireworks and incredible food in the meantime.  Yes, we would say that qualifies as a pretty good week. :)

If you missed anything on the LDD blog, here's a recap of the latest happenings.

Mailbag Monday: Week 12 - We kicked off July by answering three tough questions including how to handle nervousness/hesitation before a spanking, if either one of us ever feel that I (Clint) am overbearing at times, and if DD can work if the HoH isn't responsible for every little thing.

I'm A Submissive Wife - Chelsea talks about how submission works in our marriage, and how her submissiveness to her husband doesn't necessarily mean she wants to be, or needs to be, "submissive" to everyone else.


Saturday Stories: "The Sun Break That Changed Our Marriage" - Guest writer Meredith, from the blog New Twist, After All These Years, shares how domestic discipline isn't just for the young, but the young at heart as well.

That wraps things up for the week!  Like we mentioned in the weekly updates, we'll be gone on vacation all next week, so we will not be able to respond to emails, comments, etc. until we return.  As always, we thank you for your continued readership and support.  It means so very much to us.  We hope you all have a safe, happy, and wonderful upcoming week!  See you again soon, friends!

Written by Learning Domestic Discipline at 2:42 PM No comments:

Another week is in the books!  In fact, another month is in the books.  Learning Domestic Discipline closed out the final week of June with a brand new downloadable packet.  Did you get your copy?  If you missed anything over the past seven days, we'll get you all up to speed.

Presenting the Downloadable HoH Packet! - The latest free LDD download is for the all the HoHs out there.  It includes information on lecturing, punishments, reinforcement, and a whole lot more!  It's 50+ pages of information written specifically for the head of the household in your relationship/marriage.  Download your free copy today!  (Or, you know, whenever it's convenient for you.)

Five Things Friday: Holiday Weekend Edition - We prepare for a personal vacation, and domestic discipline bloggers all around the world rally behind a very special 6-year old little girl.  She's in our thoughts and prayers, and in our hearts.

Onward we go into July!  We hope everyone has a wonderful upcoming week!

Written by Learning Domestic Discipline at 6:11 AM No comments:

Hello Learning Domestic Discipline readers!  How was your week?  Oh, ours was...interesting.  Thanks for asking.  We changed things up a bit on the posting schedule.  Rather than post a Saturday Stories article from a fellow DD'er this week, we wrote a couple of personal domestic discipline stories ourselves, one of which was posted on Thursday.  If you missed anything, which would have been p r e t t y tough to do this week, we'll get you all up to speed.

Mailbag Monday: Week 11 - Chelsea sat this round of questions out, so I (Clint) answered questions about practicing domestic discipline when apart from your partner for months, whether or not the submissive partner should still be punished if the HoH "started it", and how my wife and I keep things "fresh" in our domestic discipline marriage in this week's Mailbag Monday post.

"Domestic Discipline is Abuse" - In the first of two personal stories from the heart, I (Clint) talk about how I reacted when I first heard about the domestic discipline lifestyle.  How similar is it to your initial reaction?

"Domestic Discipline is Abuse?" Part 2: Chelsea's Story - In a second personal story from the heart, Chelsea opens up about the things in her life that truly define her as a person, and she elaborates on how the domestic dynamic really works for anyone who may be visiting LDD for the first time.

We hope you all have a wonderful upcoming week!  We thank everyone for their continued readership and support.  Until next time.

Written by Learning Domestic Discipline at 6:22 PM No comments:

We had a great week here at Learning Domestic Discipline!  We were asked another tough set of questions (AGAIN) in this week's Mailbag Monday post, and we're also offering yet another free download for readers/listeners to enjoy!  If you missed anything this week, we'll get you all caught up with the latest LDD happenings.

Mailbag Monday: Week 10 - We offer our advice on how to take the next step when it comes to spanking implements, how to handle a difference of opinion when it comes to punishing children in a unique family dynamic, and what one CD we would replace in our collections if all of our music was stolen in this week's round of Mailbag Monday questions.

The Lecturing Podcast - In our second LDD podcast, we cover a very important domestic discipline component -- lecturing.  This podcast even includes a real lecturing example by us (Clint and Chelsea) within it.  You can read more about the new podcast, and download it for free, by clicking the link to the post (above).

Five Things Friday: The Punishment Edition - Chelsea talks about her unfortunate punishment-filled week, a fellow DD blogger talks about "Stress Relief Spankings", and an all-too-real singles dating site that you never knew existed in this week's Five Things.  Oh, just WAIT until you see this one.

We wish all the great dads out there a very happy Father's Day!  We hope you enjoy your day with your loved ones.  :)  Thank you all for your readership and support this week!  Onward we go to next week....see you then!

Check out our NEW site! 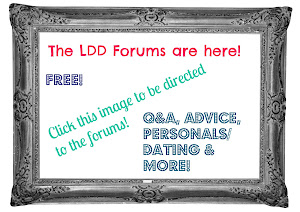